Donald Campbell was born at Canbury House, Kingston upon Thames, Surrey,  the son of Malcolm, later Sir Malcolm Campbell, holder of 13 world speed records in the 1920s and 30s in the famous Bluebird cars and boats, and his second wife, Dorothy Evelyn née Whittall. 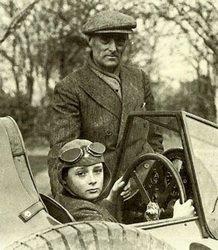 Donald behind the wheel of the Napier-Campbell Bluebird with his father Malcolm looking on.

He broke eight absolute world speed records on water and on land in the 1950s and 1960s and remains the only person to set both world land and water speed records in the same year.
Campbell attended St Peter’s School, Seaford and Uppingham School. At the outbreak of World War II he volunteered for the Royal Air Force, but was unable to serve because of a case of childhood rheumatic fever. He joined Briggs Motor Bodies Ltd in West Thurrock, where he became a maintenance engineer.

Subsequently, he was a shareholder in a small engineering company called Kine engineering, producing machine tools. Following his father’s death on New Year’s Eve, 31 December 1948 and aided by Malcolm’s chief engineer, Leo Villa, the younger Campbell strove to set speed records first on water and then land.
He married three times: to Daphne Harvey in 1945, producing daughter Georgina (Gina) Campbell, born on 19 September 1946; to Dorothy McKegg in 1952; and to Tonia Bern in December 1958, which lasted until his death in 1967. Campbell was intensely superstitious, hating the colour green, the number thirteen, and believing nothing good ever happened on a Friday. He apparently also had some interest in the paranormal, which he nurtured as a member of the Ghost Club.

Campbell loved life and certainly lived it well. Despite being a qualified engineer, a successful businessman, a multiple record-breaker in his own right and a highly effective advocate of his own cause, Campbell was a restless man and seemed driven to emulate, if not surpass, his father’s achievements. He was generally light-hearted and was generally, at least until his 1960 crash at the Bonneville salt flats, optimistic in his outlook. Behind the public façade of speed king, he was a complex character – proud and vulnerable, increasingly anxious about his place in the world. He had effectively given himself an impossible task – carrying on his father’s role in an age when logic must have told him everything was against it. Campbell was a great patriot. The way he viewed it, his achievements were not for himself, but for the greater good of Britain.

Campbell was awarded the Commander of the British Empire (CBE) in January 1957 for his water speed record breaking, and in particular his record at Lake Mead in the USA which earned him and Britain very positive acclaim.

On December 31st 1964, after breaking the world land speed record in Lake Eyre, South Australia, with only hours to spare, Campbell broke the world water speed record on Lake Dumbleyung in his jet propelled hydroplane boat, Bluebird, giving him his two world records in the same year.

He was tragically killed on January 4, 1967 at Coniston Water, England, during another record attempt in Bluebird.

Tonia Bern Campbell is a singer, actress, author and teacher who married Donald Campbell in 1958. She was an integral part of the team.

Tonia has given the Dumbleyung community an account by email in her own words of the final day in December 1964 when it was not expected that the conditions on the lake would be good enough to make an attempt at a run.

Another windy day on Lake Dumbleyoung and this on the last day of 1964 .
We had been there for weeks and were told the Lake was a calm one ,but like
Lake Eyre ,predictions can be wrong.

That morning as we climbed from our Caravan bunks we could hear the howling winds.
Donald looked at me and sadly smiling said ” I’m afraid that those winds are blowing our dreams away” Having called me many times his uncomplicated optimist I told him the day was only beginning and the winds could calm dawn. Some hours later although calmer it still was not right for a record run.

Donald suggested taking the plane ,and do some flying to lift our moral.
Graham Ferret (our project manager) came with us.
We had been flying for some time, mostly above the Lake surroundings
when Graham ,sitting behind me ,tapped me on the shoulder then without
a word pointed dawn to the lake. I could not believe my eyes, it looked
more like a mirror then a lake .I yelled above the engine noise .
“Donald ,go back the Lake is ready.” You never saw a faster return flight and landing.
We jumped in the land rover and raced to the lake. The team had been fast at work. The Bluebird was ready and waiting for her Skipper who hastened into the cockpit,
I handed him his helmet,gave him Mister Whoppet ,the cockpit closed
and off they went. Donald did not wait for Leo ,s O.K. at the return run.
He took a chance and that time ,got away with it….at last…WE HAD OUR ” BIG DOUBLE”

Was that really fifty years ago ? It feels like yesterday.
That evening we had hot champagne and corn beef can sandwiches and nothing ever tasted better.

Mr Whoppit is well known as the teddy bear mascot of Donald Campbell.

As was his father Sir Malcolm Campbell, Donald Campbell was highly superstitious.

Both consulted spiritualist mediums and fortune tellers and Campbell also placed his faith in a lucky mascot, Mr Whoppit.

He refused to drive unless Whoppit was with him. One of his wife Tonia’s tasks was to hand Whoppit to him on entering the cockpit of Bluebird.

Whoppit was with Campbell during his serious crash during a land-speed record attempt at the Bonneville Salt Flats in 1960, driving the Proteus Bluebird and also with him when he broke the world water speed record on Dumbleyung Lake in 1964. 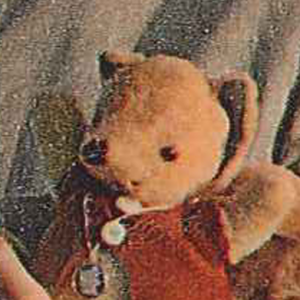 Campbell was killed during a record attempt on Coniston in 1967, while driving the jet hydroplane Bluebird K7.

His body wasn’t recovered until 2001, although Mr Whoppit floated free and was found almost immediately.

Campbell also named one of his dogs ‘Whoppit’.

‘Woppit’ first appeared as a cartoon strip ‘The story of Woppit’ about a toy teddy bear, from the first issue of the comic Robin in 1953.

In 1956, Merrythought manufactured a 9-inch tall Woppit bear wearing a red felt jacketand one of these was given to the (adult) Donald by his close friend Peter Barker.

On joining the Bluebird team, Woppit acquired a miniature of their “Bluebird” patch sewn to his jacket, later followed by a one-piece flight suit.

His name also changed slightly to ‘Mr Whoppit’. In 1959, both Campbell and Mr Whoppit were photographed together in Robin.

In the late 1990s, Merrythought re-issued a limited production of 5,000 replicas of Mr Whoppit, with the original red jacket now sporting the Bluebird motif.