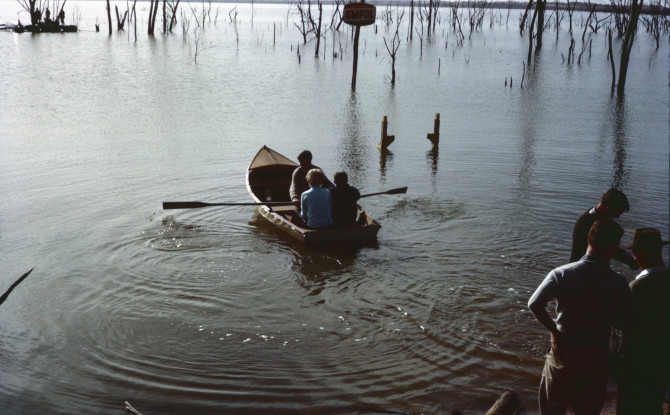 In November 1964 Donald attempted to break the world water speed in my hometown of Barmera in South Australia.

He did break the Australian record whilst he was there.

I was 18 years then and after finishing school was lucky enough to join the Bluebird team as general helper. Aging engineer Leo Villa and mechanic Maurie Parfitt needed a young person to lend a hand with various lakeside tasks. On the night before departing Barmera, Donald asked me to join the Bluebird team in the move to Dumbleyung .I drove the Woodies truck carrying the spare jet engine to the railhead at Port Augusta where we were loaded onto the freight train for the West. From Kalgoorlie we drove in convoy to Dumbleyung.  It is amazing to see photos of Donald ,Tonia and the Bluebird after 50 years. 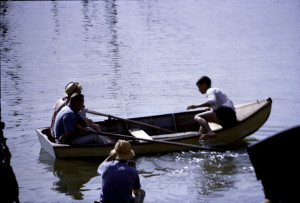 Angus in 1964, about to row Donald Campbell and Tonia Bern out to the Bluebird. Photo: John Dart

One of my jobs was to row Donald out to the Bluebird for his record attempts. I have many great memories as a young fellow .I remember Donald’s great concern when I cut my foot on the rudder of the Bluebird ( I still have the scar) and Donald flying me to Wagin to have it stitched up .The fabulous Christmas party with Tonia singing at the Dumbleyung pub .On December 31st Donald had actually departed for a look at coastal lakes near Perth but turned around when he saw the condition of the lake. He came back and I rowed him out to the Bluebird; a fabulous day. That afternoon after breaking the record Donald asked me get everyone together and, as a part of his thank you he presented me with his Bluebird cockpit overalls… I still have them. 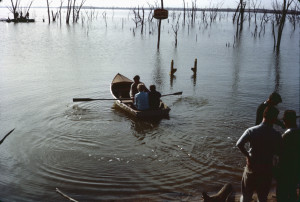 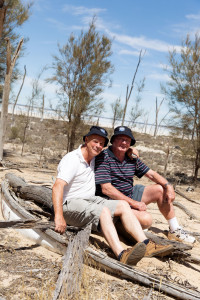 Angus Tuck and fellow Barmera team member, Brian Caddy,  50 years later sitting in the remains of the dingy used in 1964. 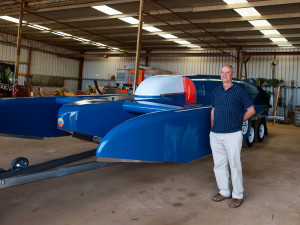 Angus Tuck by the Bluebird replica in Dumbleyung. December 2014