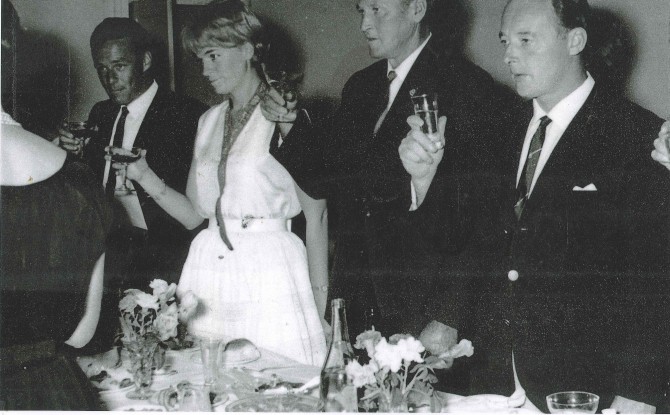 Part of my career in Local Government was spent as CEO of the Dumbleyung Shire Council from 1963 to 1966 and during this period, very much in the news in 1964 was the fact that in July that year Donald Campbell had broken the World Land Speed Record in his jet car Bluebird on the salt flats of Lake Eyre in Central Australia, achieving a speed of 403.1 mph (648.72 km/h). This drove him to even higher challenges and already being a water speed ace, he set his sights on breaking the Land and Water Speed records in the same year.

His father, Sir Malcolm Campbell had also been a speed ace, breaking water speed records in various models of his Bluebird boat in the 1930s and the young Donald was driven to emulate his father in the 40s, 50s, and 60s and added the land speed record to his goal.

After his success on land he had his jet boat brought to Australia. He had named his boat Bluebird as well. He made several unsuccessful attempts on the water speed record at various locations in the east and finally came to Lake Bonney in South Australia to try again but he was consistently frustrated by the elements, including unpredictable weather.

Sometime during November and in utter frustration Campbell had given up on the idea of breaking the water speed record in 1964, deciding to look elsewhere in Australia for more suitable water and planning to have another crack after new year. Hearing this a local farmer came to me with a suggestion I try and contact Campbell and suggest he fly west to look at our Dumbleyung Lake which was then overflowing with its waters measuring 8 mile long by 3 mile wide. I was able to contact him with little effort and he said “why not”. He was a competent pilot so he flew his own aircraft from SA and landed in a farmers paddock near the lake. He had his chief engineer, Leo Villa with him. We took them out to the lake and after detailed inspection and some discussion he said it was worth a try. His further thought was maybe -if we locals could get done all that he needed in time he might still have a chance of achieving his aim in 1964.

Campbell and Villa flew back east to load Bluebird onto a low loader and to send it and all their other gear in a convoy of vehicles to WA. In the meantime we started getting everything ready in time and to this end virtually everyone was venturing into untried waters. Many people including farmers, who were in the middle of harvest, Council staff and townspeople bogged in to help with their particular expertise.

When stationary Bluebird sat low in the water with the cockpit seat being below water level. Consequently, the driver could only see a short distance in front. Also, when in full flight, the nose of the boat rose out of the water so that less than a square metre of its planning hull had contact with the water. This meant that all Campbell could see was the nose of his boat and he had no chance of steerage. His system was to line the boat up on his intended course, give it throttle and hope for the best.

To break the record Campbell had to make a run up and back over a measured mile within an hour. He needed a mile of water to gather speed, a mile for official timing and a mile to slow down -at least three miles of clear water before being turned around by support crew for his run back. Surveyors from the Department of Lands and Surveys came down and mounted cameras on concrete bases at the start and end at the official measured mile. The system being for these cameras to take a photograph of Bluebird as it flashed past at the start and finish of each run, with the speed being calculated on the time span between the two photographs.

We floated 20ft x 20ft rafts on 44 gallon drums for support crew at each end of the three mile stretch and because curvature of the earth prevented vision from one end to the other at water level and so crew could take sight to line up Bluebird on course before each run. We made up 20ft x20ft banners from orange dyed wheat bags stretched over steel frames and floated these on 500 gallon fuel drums, with their bases being 20ft above water.

The news was out of course and tourists started to flock into a little country town that hadn’t been used to such attention. Because the town had no Tourist Office Council office phone (there was only one) was inundated with inquirers and outside office hours our home phone was the automatic target of intending visitors, the press etc. In addition, communication needs necessitated setting up a two way radio link between our home and other essential points, which meant someone had to be on duty at our place – and this was usually Margaret or perhaps a friend.

Campbell’s Bluebird and its entourage eventually rolled into town followed by a crowd of locals, tourists and others. It was late in the day and for so called security the Bluebird was backed into our fairly confined back yard for the night. Daily News and other photographers were there in swarms and our youngest son Simon, who was the just over three was photographed sitting astride of Bluebird.

Next morning Bluebird was taken down to the lake and launched. The motor was kicked into life and tuned up and the boat was given a few test runs at considerable speeds, with lots of sightseers watching from the high ground of the surrounding banks. And then the frustration of flocks of moulting ducks and an unsettled lake surface over many trial runs started.

Moulting water fowl cannot fly easily or very far and consequently tend to remain on the water, refusing to be hunted off. And this was one of Campbell’s problems. There was great danger of ducks being sucked into the front of the jet motors and also, because such a small area of the boats hull had contact with water at high speed, the slightest ripple of the water surface caused by a slight breeze and even the wake caused by swimming ducks could cause the boat to bounce as much as fifty feet. Consequently Campbell insisted on perfect water surface conditions before he was prepared to have a full throttle crack at the record and these condition evaded him day after day.

December 3lst dawned and an early inspection revealed that lake conditions were no better. So being resigned not achieving his goal and leaving Leo Villa and crew to pack up Campbell took off to his aircraft with a view to coming to Perth and perhaps look for other possible venue in 1965.

Suddenly the breeze dropped, the ducks disappeared to the banks and the lake settled to a glass like surface. A vehicle was dispatched in a hurry to stop Campbell’s departure and to get him to have a look. He did and he agreed with his Engineer that it was worth a try and within a very short time Bluebird was in the water and lined up for a try. Campbell tore down the course and was turned around for an immediate return run to achieve a record speed of 276.33mph (444.71km/h, shattering his previous world record of 260.35mph (418.99km/h on Lake Coniston, Cumbrie in 1959)).

Lots of celebrating that night of course and then the pack up, cleanup and undoing. And so Campbell and crew left. Dumbleyung settled back into being a quiet country town and we all went back to what we normally did.

A little over two years later, on 4th January, 1967 Campbell attempted to break his own water speed record on Coniston Water in his modified Bluebird. Travelling at 300mph (483kmih) the boats nose lifted, it catapulted 15m and somersaulted back into the lake and disintegrated, probably killing Campbell instantly.

The broken up Bluebird was later raised and re-assembled. Campbell’s body was not found until 2001 -34 years later. His remains were buried near Coniston Lake.

He remains the only person to break both land and water speed records in the same year.