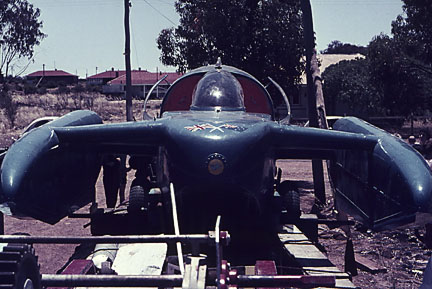 Below is a press release from the Dumbleyung Bluebird Committee concerning the fact that the Dumbleyung Community has raised enough money to start the build of a full scale replica Bluebird for display in Dumbleyung.

Special note also needs to be made that there are a lot of Wagin residents who played a big part of the original Donald Campbell World Water Speed Record and who will have memories of the event.

Camp Campbell, the base camp, was situated in the Wagin Shire and access was made through farm land. Locals from both shires worked with Donald Campbell’s team to prepare the site and the course.

A community fundraising drive in the Shire of Dumbleyung has ensured the construction of a replica of the hydroplane used to break the world water speed record on Lake Dumbleyung.

The replica of the Bluebird K7 Hydroplane Mark 19, is the first stage of the Bluebird project aimed at increasing awareness of British speed legend Donald Campbell’s world water speed record which he broke in 1964.

The Bluebird project is a community initiative which will see the construction of the replica and the establishment of a Dumbleyung Discovery Centre which will house memorabilia from the event, an educational exhibition and collections of local stories.

The tender to build the Bluebird replica has been awarded to Mark Motzouris from Statewide Boating in Ledge Point. Mark is a member of the WA Speed Boat Club and a regular speed competitor racing off the Burswood Water Sports centre on the Swan River.

Statewide Boating plan on sharing their construction progress with the wider community via our website and Facebook page. There will also be an opportunity down the track for public onsite viewing as the project progresses.

The replica will be housed on the main street of Dumbleyung opposite the former Post Office which will house the Dumbleyung Discovery centre, and unveiled in time for the 50th anniversary celebration on December 31st 2014.

Bluebird Fundraising and media Team Member Louisa Dare said she was overwhelmed with the community spirit, interest and support the project has received.

Mrs Dare said the committee is hopeful further donations will be received to ensure the replica is completely community owned.

All donations of $50 and over will be recognised on an honour board to be housed in the Dumbleyung Discovery Centre.

For further information on the project or to donate please contact Louisa Dare on 0428227000 or email bluebirdcommunityfundraising@gmail.com.

To keep up with the progress of the project keep visiting this website, or join us at our Facebook page!