The Dumbleyung Bluebird Interpretive Centre project is moving forward with new and enthusiastic committee members appointed to the committee at last week’s Dumbleyung Shire Council meeting.
The council agreed to three nominations to sit on the committee, appointing  new committee members are Rod Frost,  Chris Bairstow and Marion Haselby, who replace retiring committee members Don Kane and Ian McCormack.
Mr Frost is a returning committee member and as a long term Dumbleyung resident has a keen memory of the Bluebird world water speed record on Lake Dumbleyung in 1964.
The other two new committee members bring a variety of skills and knowledge to the committee which was welcomed by chairperson Louisa Dare.
Council also  considered a request from the committee to reallocate  funds from the Grants/Landcare Support Officer position and decided to reallocate funds to engage a specific grant writing consultant, as the shire position is currently vacant.
This has allowed Solum WBS to be contracted to assess what information is still required for a grant application and to write up applications to Lotterywest and one or two other funding bodies.
Although the previously employed  consultants  Emergent Form developed an interpretation plan for the committee, it lacked the necessary information to apply for the grants.
Council also considered the purchase of the old Post Office building at the meeting.
Council decided to authorise the shire president to place an offer on the building subject to approval by council.

The Post Office is the preferred location to house the proposed Community Resource Centre and Bluebird Discovery Centre.
This will pay a tribute to an important historical building within the community and once again give this central building purpose.

Chairperson of the Bluebird Committee Louisa Dare welcomed the new committee members on board and also thanked the council representatives on the committee, Crs Dare and Ball for their support. She also commended Chelsea Mott for her thorough presentation to the council meeting
regarding the consultant issues, in particular the co-locating of the Community Resource Centre and the Bluebird Discovery Centre.
“Our project is gaining momentum and support and we are moving forward to the next exciting stage,” Mrs Dare said.
A decision will be made soon on the construction of the replica and a preferred contractor will be identified, to be formally engaged once funding is secured.
Lottery West representative Lee Grmas is due to visit Dumbleyung on December 5 to discuss the project following  a Lotterywest seminar to be held at the Wagin CRC on  December 4.
However a decision on the grant funding will not be known until next year.
Mrs Dare said recently publicity given to the Bain Estate, an incoming asset for the shire, was acknowledged and was an extraordinarily generous commitment made by the family to the Shire of Dumbleyung.
However the process of transferring this inheritance to the Shire was in the hands of legal professionals and it was unknown what time frame it may take to realise this asset to the shire, possibly extending into many months and even years.
Meanwhile, on a recent trip to England, shire councillor and committee member Jacki Ball took the opportunity to visit Coniston and tour the Ruskin Museum, which has a comprehensive display of the Bluebird and Donald Campbell story. 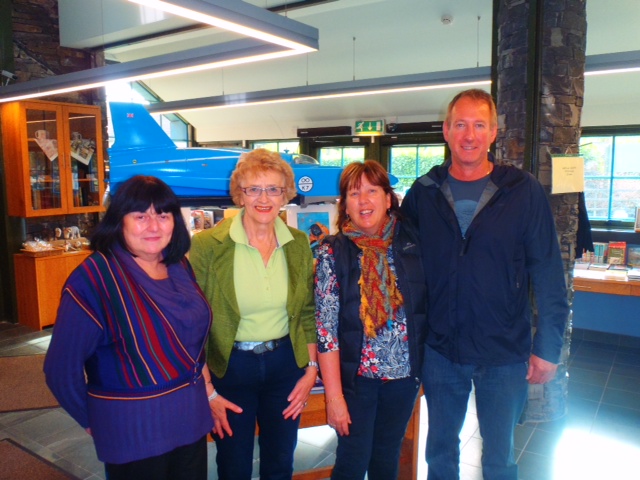 Cr Ball met with museum curator Vicky Slowe, who provided a very knowledgable commentary of the museum contents. Ms Slowe also explained their museum’s desire to build a full scale replica of the Bluebird craft and display it in the museum.

“It was extremely interesting and exciting to learn about their project and they were just as excited to learn about ours,” Cr Ball said. “It was great just to have that contact with the museum on the other side of the world and know that we are all basically heading in the same direction with our projects.
“It was also very moving  to visit Donald’s Campbell’s grave in Coniston and also his memorial at Coniston Lake, which of course is where he was killed in January 1967.” 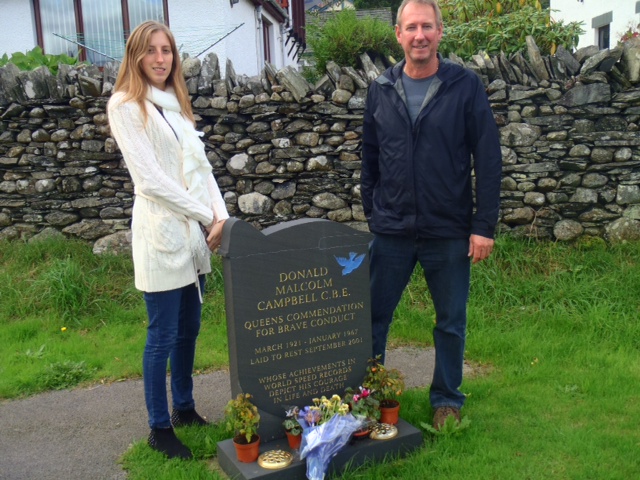 FINAL RESTING PLACE: Ellie and Colin Ball at Donald Campbell’s grave in Coniston. They were intrigued to the gravestone in the shape of Bluebird.